After the Starr-Edwards valve was perfected in the early 1960s, replacement became a frequent procedure. In the first six years the mortality rate fell from 50% to zero using the original model [1]. The biggest part of patient post-operative care is requirement of long-term anticoagulants to prevent thrombosis, which have a mild risk of bleeding ulcers or hemorrhages into the brain [2].

Other types of valves:

With the creation of the Starr-Edwards valve others started to develop different designs and materials for the valves.

Developed in latter 1960s, a disc replaces the ball. These were proved to be inferior and are no longer used [3].

Developed in the early 1970s, these were designed to prevent “excessive contact wear from the retaining strut components” [4]. 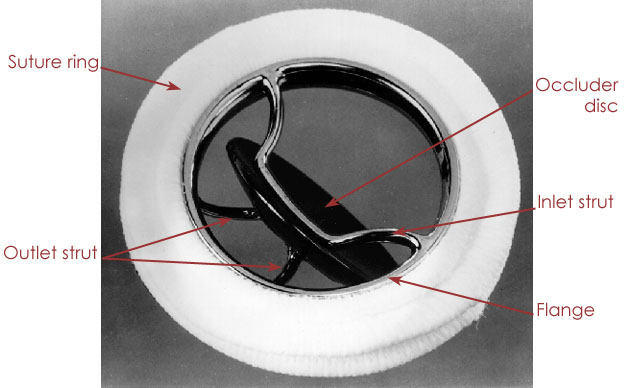 Developed by St. Jude Medical Inc. it uses pyrolytic carbon for the valve material. This has become the material of choice for most doctors. The drawback to these, however, have been leaky backflow into the atrium chamber due to the valve not sealing completely. [5]

Bioprostheses valves are those made from the heart tissue of animals, usually pig or cow. The disadvantage to these is that they tend to not last as long as mechanical valves. [6] Other options is to use pulmonary tissue from the patient to graft onto the area of the valve which require only antibiotic use and not life-long blood thinners like mechanical valves. The first porcine valve was actually introduced by Edwards Laboratories in 1975 but the technology is still not as solid as mechanical valves. [7] Still, there are some doctors who advocate for the tissue valves’ use as it creates a “more normal, undisturbed central flow” [8].

Above is a Pig Valve from the Tissue Mechanics Laboratory. [Source]

Today, since the first Hufnagel valve was implanted in 1952, about 3 million prosthetic heart valves have been implanted with over 50 different models in existence [9]. Despite the change of materials and segway into animal tissues, the overall design of the Starr-Edwards artificial valve has been left undisturbed and is still the preferred valve of choice by many surgeons [10].

After the Hufnagel and the Starr-Edwards models proved that mechanical replacements were viable options, doctors started to explore the world of mechanical hearts, kidneys and other entire organs. Hufnagel once  told a reporter, “Certainly we’ll be able to implant artificial organs-someday” [11]. Perhaps the best known is the Jarvik Artificial Heart first successfully implanted by Dr. Robert Jarvik in 1982 [12] the actual inventor of the artificial heart still controversial but the first, though temporary,  implantation was performed by the famous Dr. Denton Cooley of the Texas Heart Institute in Houston in 1969 [13].

The work of Starr and Edwards has provided countless patients with little or no life expectancy hope for a better quality of life and longevity.

Popular culture has used these inventions and other medical achievements to create the idea of the “super-doctor.” The medical profession, as portrayed by fictional characters like Dr House and Dr Ross, are examples to mainstream audiences that with the right medical equipment, such as an artificial heart or a ballpoint pen, doctors can do just about anything.

Dr House, MD- all it takes is a vicodin-induced hallucination and a drill into the patients brain. Is there anything he can’t do? [source] 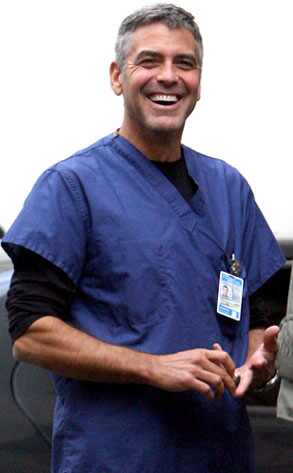 George Clooney as Dr Ross on ER. While he may have opened a kid’s airway with a ballpoint pen, he can operate on me any day! [source]